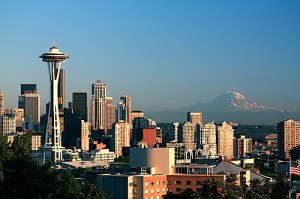 Urban growth, especially as seen in Seattle, can actually help cut demands on city water supplies. Still valid today, we wrote about this in July 2014 under the title Rainwater Collection Reduces Dependence on City Water in Seattle. Read more below:

As anyone who lives in Seattle can see, there is a massive amount of rental construction happening. With the growth of the South End of Lake Union and the Ballard area, over 23,000 units are expected to be added in the next few years.

A cultural shift in water conservation with simple technology can reduce the amounts of water usage through more effective water management practices. While the “Green Storm Water Infrastructure” or GSI mandates that runoff from impervious surfaces is to be infiltrated on site, other innovative and effective technologies are crucial in reducing the need for upgrading and expansion of sewer and centralized water systems.

Think of the reduction of the amounts of water coming off our roofs into stormwater if we diverted that water to usage such as toilet flushing and laundry facility. This practice could cut runoff by as much as 50% in high density housing complexes, while saving hundreds of thousands of dollars that would be used to meet the demand.

Bio swells and rain gardens do very little for infiltration during the rainy periods when the ground is already saturated. Rainwater collection used for toilet and laundry facility could be using that water during those months rather than having it overflow, and it would reduce the run off during those periods. The end product would be reduction of stormwater runoff, less dependence on city water and its infrastructure, cost savings to the building owner and tenants, better use of our natural resource, while reducing pollutants in our waterways.

Learn more about rainwater collection and whether it is a good fit for your home or commercial project. Use the form below to request a quote for a feasibility study.