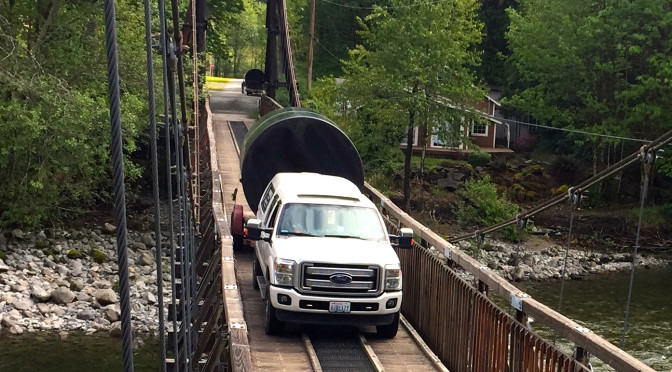 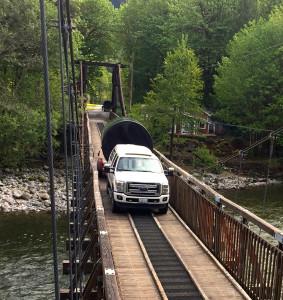 RainBank Rainwater Systems was contracted to install a 10,000 gallon, sole source, potable rainwater catchment system in Baring WA,  just east of Index. The system was designed by Chris Webb, PE of Herrera Environmental Consultants for a single family dwelling. The system will provide potable whole house usage as the only source of water for this 839 square foot home. With  41.2″  annual rainfall, the system is capable of supplying 100% of the household demand based on occupant’s usage requirements.

The small parcel size and the small bridge over the Skykomish bridge limited the feasibility of safely drilling a well and there is no public or community water system. RainBank Rainwater Systems always enjoys a challenge – and this one has many – from a very small lot with wetlands, large boulders throughout the property, the bridge, and location of site 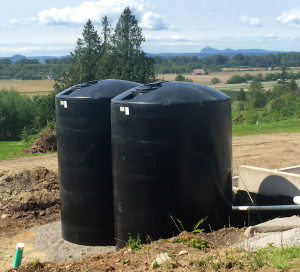 RainBank Rainwater Systems has recently begun construction of another 10,000 gallon, sole source, potable rainwater collection system in the Skagit River Basin, which has been affected by the in stream flow rates, along with a well drilling moratorium. The system was also designed by Chris Webb and Herrera Environmental Consultants for a single family dwelling. Again, the system will provide whole house potable water as the only source of water. The house is 3500 square feet, so 33.2″ annual rainfall  will meet the daily demand for 95% of the days in this model with no change in use. The reality is, that the occupants would decrease usage during times of drought and therefore the 2 – 5,000 gallon cistern volume is considered capable of supplying 100% of domestic use.