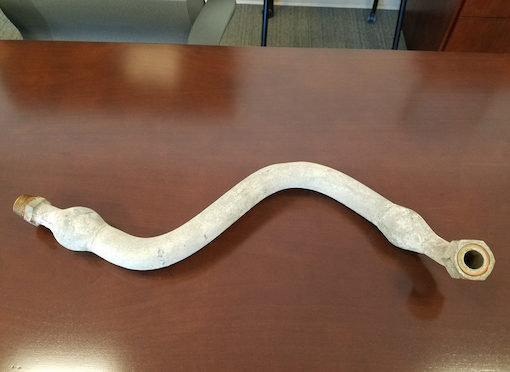 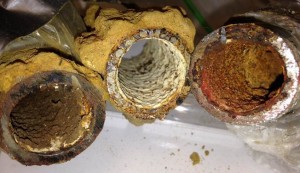 Seattle Public Utilities asked residents to run their water for two minutes before drinking over concerns of lead exposure.

SPU is testing water that MAY have their supply line connection to the house service line using gooseneck fitting. As of Friday, SPU estimates 2,000 older homes may have this gooseneck fitting, with Tacoma estimated at 1,700. Both Utilities have been testing and mapping throughout the weekend.

This gooseneck lead fitting is the sort connecting water mains to pipes leading into older homes. In Seattle, it’s typically in homes built before 1930, and only some of those. (Chris Gleason/Tacoma Public Utilities)

According to SPU, “Seattle drinking water sources do not contain lead. However, lead can leach into water from plumbing and materials built with lead-based solder, brass fixtures, or some types of zinc coatings used on galvanized pipes and fittings.”

NSF/ANSI 372 has an updated definition of the “no lead” ruling allowing a weighted average of 0.25 % lead in fittings, pipe, and solder – a far cry from 8.0% in the past. Galvanized pipe and plumbing has not been used for potable water supplies for decades. However, copper plumbing and its solder was not held to the above standards until January 2014. Copper plumbing or brass fittings used before this standard may cause an elevated level of contamination above the allowed EPA drinking water standards for lead. You can have your water tested for levels from a certified lab in your area; a list of certified labs can be obtained by the Department of Ecology.

RainBank’s’ post Is Decentralized Water and Sewer Systems the Answer to Puget Sound Region’s Infrastructure, dated July 2014, talks about the effects of this growth, demand and aging infrastructure and how it will impact our water and sewer systems economically.

As time will tell, more concerns will arise with our centralized water system. Costs to upgrade, renovate and repair will be high. Rainwater collection as a source of domestic water will become more mainstream – as already seen in Seattle and other cities throughout the US in the past few years. Proper filtration and plumbing techniques can be implemented for the homeowner to protect a household from lead leaching because older materials were used in the past. RainBank Rainwater Systems designs these systems for both those who wish to collect rainwater for domestic use and those who remain dependent on city water supplies.