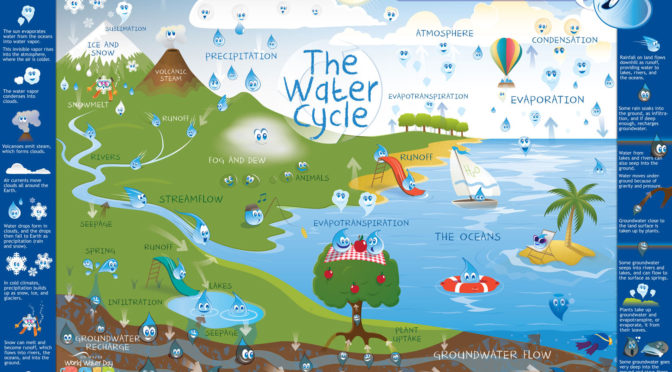 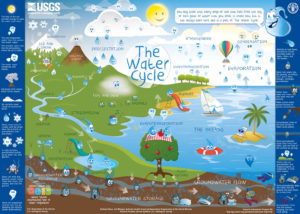 An informative, fun and interactive diagram jointly developed by The U.S. Geological Survey (USGS) and the Food and Agriculture Organization of the United Nations (FAO) outlines an easy to follow water-cycle diagram for schools.

RainBank has previously discussed this phenomenon, in an article from May 2015:

The continual movement of rainfall from the bodies of water, land, and the atmosphere is part of the hydrologic cycle.

The cycle starts with condensation. When water vapor condenses in the atmosphere it forms clouds, when the condensation becomes too heavy rain is formed and the clouds release the rain. 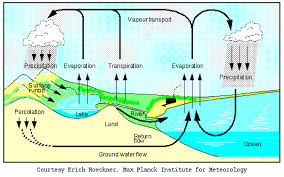 When rainfall reaches the surface it infiltrates into the soil, becoming groundwater. The infiltrated groundwater recharges our aquifers, rivers and lakes. Water that runs off the surface is referred to as stormwater.  Water is returned to the atmosphere through evaporation by the sun heating the water, changing it to a gas and it rises into the atmosphere and becomes vapor again.

Depending on soil conditions, the movement of stormwater across the surface can cause erosion and also carry pollutants into our bodies of water. This is why stormwater management is so important. Stormwater management practices such as infiltration, or collection, slow down the process of surface water runoff and helps keep erosion to a minimum. Much of the pollutants associated with stormwater runoff are not carried to our larger bodies of water – keeping our natural environment healthy.

It is important to have a basic understanding of water’s lifecycle in order to fully capture the meaning of why rainwater collection is so important to having a sustainable future.